Patron Saints of Nothing: This book tackled a timely and difficult topic in a way which engaged me.  I flew through the book despite thinking I might not when I first picked it up.

Moonrise: I could not put this novel down.  I read it in one big, late night gulp which left me feeling prickly eyed and fluffy brained the next day.  Although I love novels in verse, I actually forgot this was in verse while I was reading it.  Good thing, bad thing? I'm not sure, but I was on the edge of my seat and invested in all the characters and their outcomes.  I could 'feel' from all the perspectives in this novel.

Mason Buttle: The heart and soul of this book was Mason.  Throughout the book I was rooting for him, trying to keep him going and willing him to overcome.  I was invested in his 'Dragon' and found his use of it inspiring, to me it was perfect that what he produced on it became key to the story.  The idea of discovering the power of writing in whatever way works for you is close to my heart.

My winner?  All three are winners for me.  Each deserves its place in this final.  In the end hope won it for me.  Mason Buttle made me feel hope after I flipped the last page and that is why I want to celebrate this exquisite novel.  Mason Buttle for the win for me.

Smackdown the Tenth - Final Round

Vanessa: Well this is finally a real showdown!  I genuinely enjoyed all three of these books and am happy to see them in the finals.  I chose Moonrise over Patron Saint in the previous round so it is still my pick of the two but with Mason Buttle in the race, it’s game on.  I read Mason Buttle when it first came out in 2018 and felt such a love for Mason and his quirkiness.  And then I realized he also had a huge heart.  It has stuck with me everyday since and was a 5 star book.  So even though the battle is strong, the truth is...Mason Buttle is my pick!

Norma: I loved all three of these books.  I chose Moonrise in the last round and so it is still fresh in my mind.  My battle is between Moonrise and Mason Buttlw which I also chose to move on early in the game.  Though I wouldn’t be disappointed if either was the champ, I am choosing Mason Buttle as the winner because the story stayed with me throughout

Debbie:I loved Moonrise but the question of which one of these books wins for me is an easy one. “The Truth As Told By Mason Buttle” is my favorite. Hands down. Love, love, loved it
Posted by Vanessa at 9:04 AM No comments:

Although, it was another tough Smackdown round, my vote goes to Ghost Boys. I think this is a story that is accessible (length, language) to more students then Mason would be. Simply put, it is a must read, in order to change deep rooted beliefs of racism. People need to hear the stories of others over and over again allowing them to sink in. Building understanding and empathy takes repetition and time. I think reading Ghost Boys could help to spread the message for the change that is still badly needed.
Andrea
Posted by Mme Smith at 2:53 PM No comments:


I started this round off with the quicker read which was Ghost Boys, it is short, sweet, and I know kids will love it. Having read it at the beginning of this round, I should have blogged right away and now I find myself trying to reminisce about the aspects I loved. I recall the lovely way that the reader follows the protagonist in his before death and after death 'worlds'. Jerome's journey leads the reader to an understanding of what lead to his death and the resulting impact it has on his family and community. I believe this book would be an introductory book to read when discussing racism, racial profiling, and stereotypes, amidst current YA loves like The Hate U Give, this novel reaches a younger reader with a similar message. It really needs to be discussed and not read just for face value. In reading some other reviews, I think it's important to note that this novel is written with the author's bias and perhaps using it in grade 8/9 where we really look at author's purpose, could lead to further/ deeper connections.

As for The Truth as Told by Mason Buttle, I'm not sure why it took so long to pick this one up, I had tons of time! It has an incredibly slow beginning and drags on as we learn more about our protagonist and his contribution to the loss of his best friend. I was reminded of a Freak the Mighty comparison with the big kid befriending the little/weaker sidekick and their struggles within the greater social aspects of growing up and not fitting in, which as we all know, isn't really a bad thing. In the end, this one just didn't hold out against Ghost Boys.

~Jan Reimer (Krystal and Rachel)
Posted by Krystal at 7:36 AM No comments:

Ghost Boys vs The Truth as Told by Mason Buttle

This will be a short blog from us this time. Both Katrina and I read Ghost Boys and The Truth as Told by Mason Buttle last year. Mason Buttle reminded us of the book, All Rise for the Honorable Perry T. Cook by Leslie Connor and we both found Perry T. Cook to be a more interesting read than Mason Buttle, which at times I found to be a bit boring in comparison. I booked talked both books in my classroom. Our vote is going to the book we couldn't keep on our shelves and the book we both saw our students enjoy the most  - Ghost Boys. (Hillcrest)
Posted by S. Workun at 5:26 PM 1 comment:

One Vote for Moonrise

I've lost contact with my team - hopefully that wasn't strategic on their part - so this is my solo vote. I vote for Moonrise.
While I enjoyed both books, I found myself expecting more from Patron Saints, but getting less, and expecting less from Moonrise, but getting more. What I really enjoyed about Patron Saints was that it explored filipino culture and took place in the Philippines, which isn't overly common in the YA that I've read, and I felt that it also incorporated LGBTQ+ characters pretty seamlessly. I think that, overall, my vote might've went to Patron Saints if it had been grittier. I wanted some grit!
With Moonrise, I was pretty engrossed right from the start and enjoyed finishing an entire book in about three hours. Something I found neat (for lack of a better word after a long day) was that I had no idea about the nationality of the protagonist and his family until about half to three-quarters of the way through the book; I found myself imagining the family a certain way, and was a bit shaken when they were not as I suspected. I think this is a good thing as it made me question why I was imagining things as I was, and could start some great conversations in classrooms.
Books written in verse aren't usually 'my thing', and Moonrise didn't change that. I didn't find that the verse added anything to the book aside from making it a quick read, but I do think that it packed quite the punch for a book that contained such a small amount of text.
Posted by Amanda T. at 7:40 PM No comments:

My vote this round goes to Ghost Boys. I read Mason Buttle first and found it to be a bit boring. I was waiting for something big to happen for the majority of the book. When I was ten pages into Ghost Boys I was more entertained and intrigued than I had been halfway into Mason Buttle. I think Mason Buttle would be a good read for elementary aged kids, maybe around grade 5 or 6 (the main character is in grade 7). Ghost Boys would be more suitable for junior high, in my opinion. I would recommend it as a grade 8 independent read. It does remind me of The Hate U Give which a lot of grade 8 and grade 9 students have enjoyed.
Posted by SBurn at 4:21 PM 1 comment: 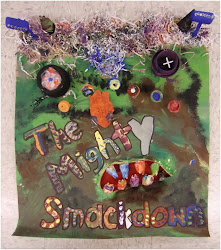